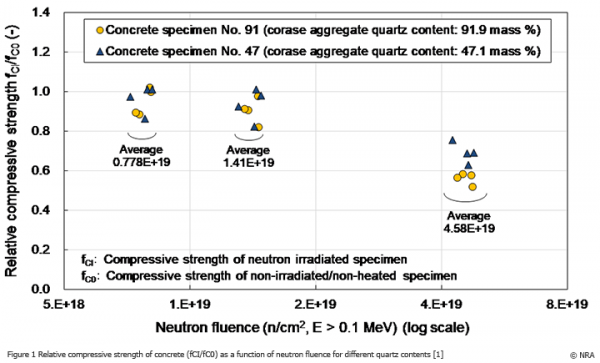 The regulatory guide for reviewing the licensee's technical report for the extension of the operating period of commercial power reactors, enacted in November 2013, requires evaluation of the proof stress of the concrete structures of nuclear power plants operated for more than 40 years if the neutron fluence exceeds or may exceed a certain limit where neutron irradiation affects the concrete strength.

Although several previous studies showed effects on concrete strength, some obtained experimental data under material and temperature conditions different from those in the concrete biological shield (CBS) wall of light water reactor (LWR) and some evaluated the neutron effects without considering the neutron energy spectrum. It has been shown that the neutron irradiation causes expansion of α-quartz, which is a mineral commonly contained in aggregates embedded in concrete; therefore, the effects of neutron irradiation on the concrete strength or the volumetric swelling may change according to the quartz content in the aggregates.

The safety research conducted by former NISA*1 and S/NRA/R*2 from JFY 2011 to 2016 focused on clarifying the effects of both the neutron fluence and quartz content of aggregates on concrete strength. Mechanical testing was performed using test specimens of aggregates and concrete irradiated with neutrons considering the materials and temperatures of the CBS wall of LWR. The evaluation was conducted based on the neutron fluence for the energy range above 0.1 MeV considering the neutron energy spectrum. 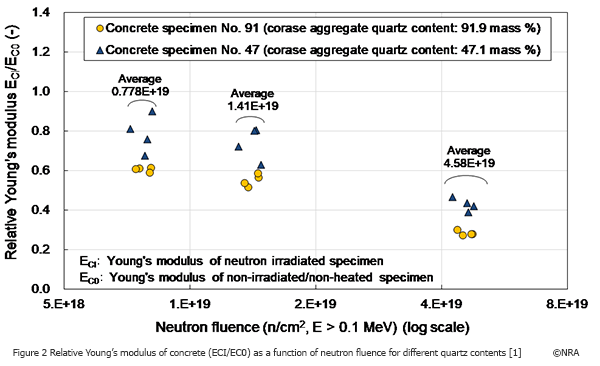